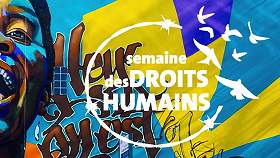 As part of the Human Rights Week at the University of Geneva, The Venerable Luon Sovath, the 2012 Martin Ennals Award winner, gives a master class titled “Social Media: A double-edged sword in Human Rights Defence” on November 23, 2021, from 12:30 - 14:00 pm.

Venerable Sovath is a Buddhist monk and human rights activist from Siem Reap, Cambodia. In March 2009 he witnessed the forced eviction of his family and fellow villagers from their homes, without reason and in most cases without compensation. This unfortunate event pushed him towards human rights activism.

Venerable Sovath was compelled to flee his native Cambodia in May of 2020, after fake videos and accusations appearing on Facebook served as the bases for a decision to ‘de-frock’ him of his monk’s robes. In retaliation for his advocacy against land grabbing and in favour of human rights, Venerable Sovath and his loved ones have suffered years of threats and reprisals by the authorities of Cambodia. Finally, the prospect of losing his religious freedom convinced Venerable Sovath that his position in Cambodia was untenable and he soke a temporary safe haven in Switzerland.

This master class is hosted by the Martin Ennals Foundation and the Geneva Center for Business and Human Rights.

To learn more about The Venerable Luon Sovath, scroll down to watch the video.